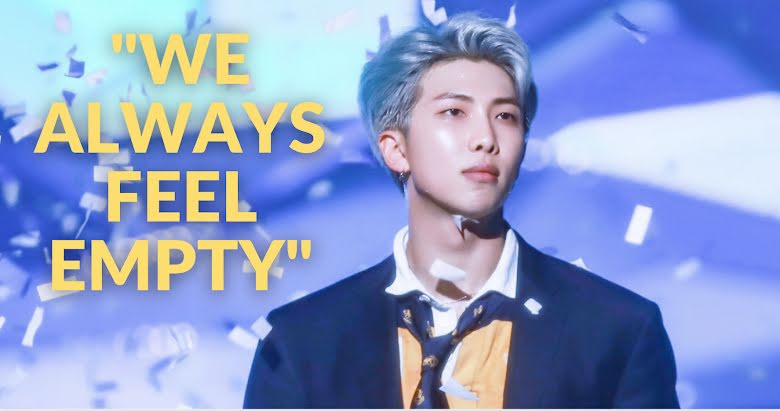 On November 20, BTS held a press conference for their highly anticipated comeback for their new album BE. It was here that the members of the boy group shared important information about the album as well as some personal life news.

Member RM was asked about how he copes with difficulties in life and the emptiness that comes along with it, to which he gave a very simple but honest answer.

The charismatic leader of the group elaborated what he meant by his statement. He admitted that,

For example, even if we were to win a Grammy, while there would be an enormous sense of joy and fulfillment, there will always be a sense of emptiness afterwards.

He continued on by sharing with the reporters,

I know it all sounds cliche. The contrast between light and day, what people see on the stage versus off the stage. However, we always feel empty at the end and it’s hard.

RM continues to elaborate with his honesty by sharing that regardless of what he accomplishes, it won’t ever be enough.

Even if we finish our performances perfectly, I think I’ll always feel the feelings of regret and despair which always discourages me. Even in this moment with ‘Life Goes On’ I struggle with those feelings.

However, he goes back to his initial response of relationships and concluded the segment by stating:

There are a lot of good and meaningful people in the world. The members, we all mean something to one another. The label means something to us and vice versa. There’s also all the people around the world who listen to our music and people like you who allow us to communicate. All of the people and the relationships we have help me cope with these types of feelings.

Fame isn’t easy but the boys of BTS seem to know how to handle all elements of it, the good and the bad. Check out BTS’s music video for their newly released song “Life Goes On” down below.

BTS Reacts To The Idea That They “Made K-Pop Mainstream”